Nice is nice (and so is Aix-en-Provence)

March in Basel isn’t all that amazing. It’s a bit of a slog of chilly temps and plenty of rain. So we were pretty psyched to get through March and head to the warm and sunny coast of France in early April.

We only wore light jackets to the airport, knowing we wouldn’t need actual coats once we got to Nice. Indeed, we left the airport, dropped our things at our hotel, and headed out for lunch at La Canne à Sucre. 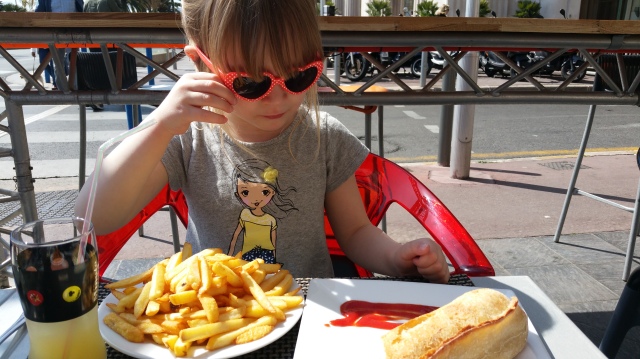 G ordered a cheese sandwich, of which she only ate the bread. It was good bread, though! 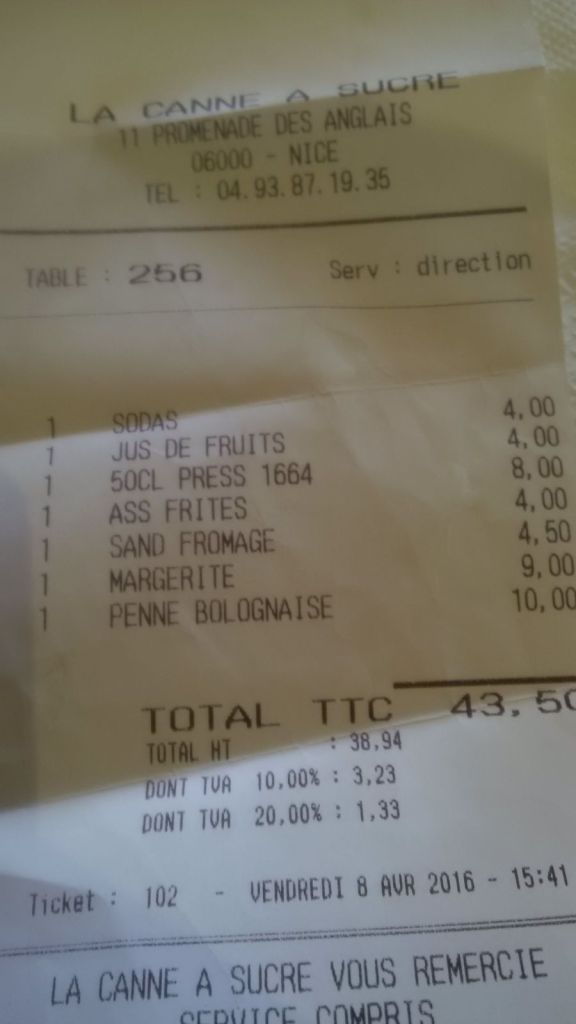 Wait, what kind of fries did we order?! Ha!

Traveling with a small child means packing lots of things to entertain her. We had the iPad for the plane and train, but that won’t work while we’re out to eat (because we have set that as a rule). I usually have a coloring book and some kind of markers, crayons, or colored pencils in my bag. This time, I also brought some dry-erase activity cards and I cannot recommend them highly enough! They’re simple enough that G doesn’t get mad that she can’t solve the puzzles, but challenging enough that she can’t whip through them super fast.

Andy and I were super impressed with this tiger, and I still am, but I can also see how far her drawing skills have come in the past few months!

After lunch, we decided to go dip our feet in the ocean. I hadn’t packed swimming suits (the water was still very cold), but it’s hard to see that gorgeous blue water and not want to be in it! (The rocky beach really hurt my feet, though.)

Me 1 second before this picture was taken: Don't worry, G! It's not high tide and the waves are pretty small! Then the Mediterranean Sea said 🌊 and we headed back to the hotel to change clothes 😂 📷: @avizzee #lavieve #latergram #momstaysinthepicture #canonrebelsl1 #niceisnice

G didn’t want to put her shoes back on her wet feet, so Andy graciously carried her back to the hotel.

After changing, we headed back out to walk more of the city. 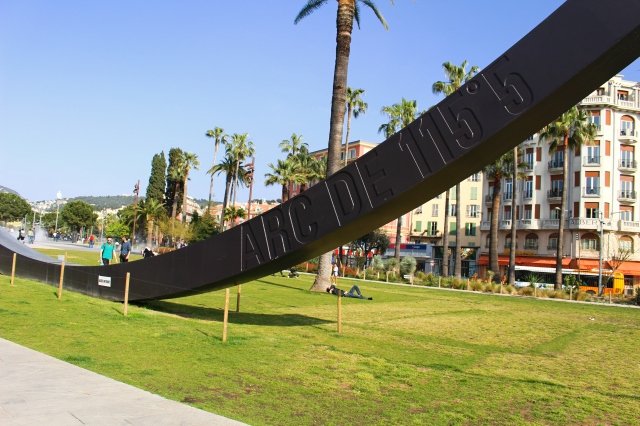 In case you were looking for this meridian, I found it in a park in Nice.

G has been on carousels all over the world (Toronto, London, and Paris for starters) and the views are getting more and more spectacular.

I (obnoxiously) kept stopping to take pictures of planes taking off from and landing at the airport over on the middle-right of this picture.

G was very excited by the prospect of sitting by this mini-Statue of Liberty, but she was less thrilled by the reality of it. 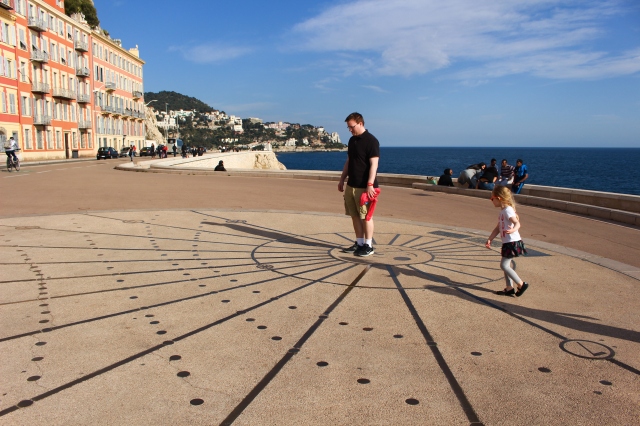 This picture was taken at 5:46 PM, so nicely done, sun dial!

See that waterfall way up there? It gave us a pretty spectacular view. #latergram #canonrebelsl1 #niceisnice #thosestairstho #abeautifulmess

I wanted that view. The steps were worth it, but I really super regretted wearing Toms instead of my supportive Nikes. 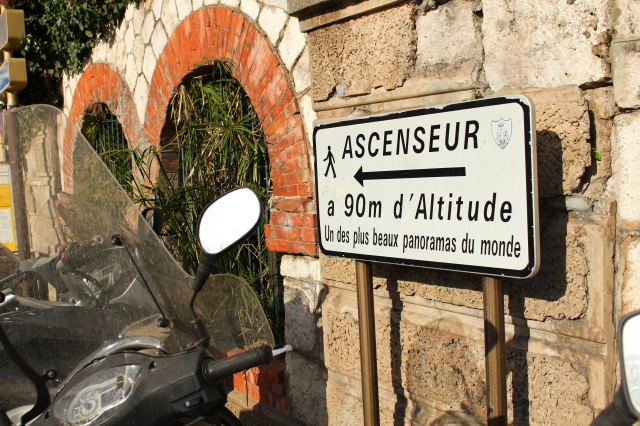 I thought that just meant “ascent,” but it doesn’t. That means elevator. I totally would’ve taken it. Andy says he still thinks the stairs were the way to go.

We climbed a shitload of stairs today and I took a ton of pictures. Andy snapped this one of me trying to convince G to come pose with me. #niceisnice

Showing off her muscles. 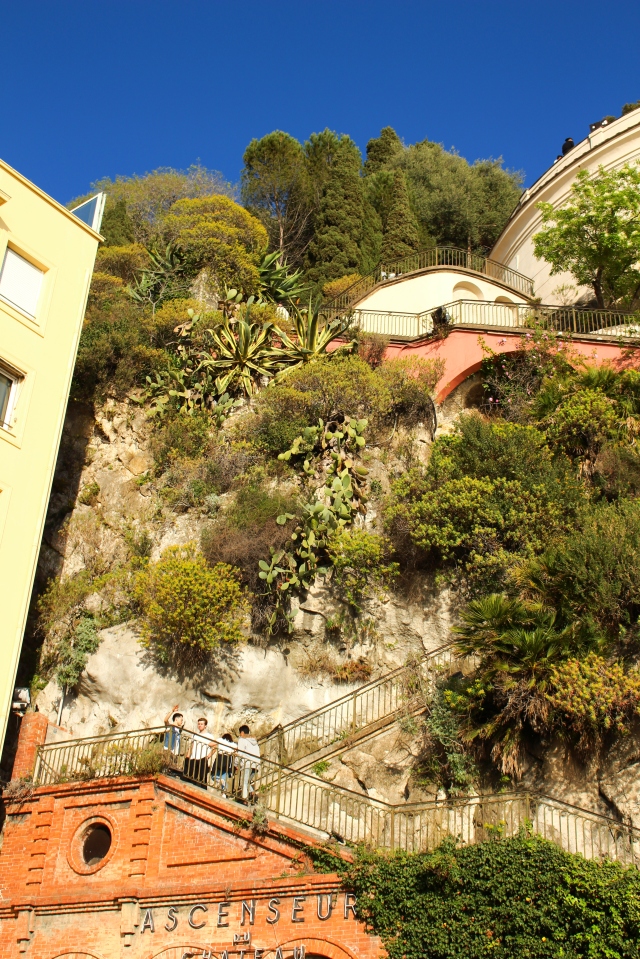 Just a few of the stairs. The platform in the upper-right is where Andy took my picture that I posted above. We climbed and climbed some more after that!

We had dinner at the Hard Rock Cafe. Is it completely ridiculous to be on the Mediterranean coast in France and eat dinner at a kitschy chain restaurant? Absolutely. But sometimes it’s easier to not fight with your child about what she’s going to eat for dinner. Andy and I weren’t very hungry and they had a children’s menu, so it was a convenient choice for us.

G had to stretch her legs all the way out to reach that bar, but she wanted to relax the same way as her dada.

The next morning we packed up to catch the train to Aix-en-Provence. A childhood friend of Andy’s is working at a university there, so we took the opportunity to visit him!

A blogger friend from back home has a sordid history with cops of Segways, so I had to snap this pic and send it to him when I saw it on our walk through the park.

"It's a chessboard!" On our way to the Nice train station this morning. #lavieve #dedakitty #latergram #niceisnice

We stopped on the way to the train station to have breakfast at Le Grand Café de Lyon. They may have an outdated website, but they can make a tasty crêpe!

View from the train, Nice to Aix. #latergram

Our train ride should have been fairly uneventful. Andy had bought our tickets ahead of time and (thought) he printed them out. Apparently what he printed out was the receipt or confirmation of purchase. We should have taken that form to the ticket machine at the train station and printed out our actual tickets. We didn’t do that. And so when the conductor came through to check for our tickets, he informed us of our mistake and, instead of taking pity on us, proceeded to make us buy more tickets. Which was made even more ridiculous by the fact that we were in the French countryside and he couldn’t get a good signal on the credit card machine for a long time. It was so uncomfortable and unnecessary!

(Luckily, a nice lady at the Aix-en-Provence train station refunded our unused tickets, so we weren’t out too much extra money!)

True to form, we got into Aix, met up with our friend, and headed to get food. What else is vacation for?! We went to an excellent burger restaurant called Burger Bar. Everything is made by hand and it was all delicious. Andy even had a tartare burger! (I assume it was tasty; I don’t go in for raw meat.)

Our friend Tim showed us around Aix for a bit after lunch; it’s gorgeous!

A lack of sleep and excess of sun and walking were making G (and me) a bit crabby, so we headed back to our hotel to relax. (I was hoping she would nap, but wasn’t so lucky.) Andy and Tim walked around for a while longer and then came back with a charcuterie and cheese feast for dinner!

Not the entire spread. My favorite parts were the salami and the (phenomenal) goat cheese.

After dinner, G watched some French Netflix while Tim, Andy, and I stayed up too late talking about expat life, what we missed about America, and a million other things (all while drinking beer and/or wine – naturally). Finally, we were all beat and needed to head to bed.

In the morning, Tim met us at our hotel so we could walk to breakfast.

Kind of obsessed with these moss-covered fountains in Aix. As for G's hair, she asked for Elsa AND Anna braids. Three French braids is about my limit, though. #lavieve #latergram #aix #aixenprovence

I don’t know why, but this sign on the sidewalk really struck my funny bone.

Any restaurant that gives me this many delicious spread options is A-OK in my book.

All too soon, we packed ourselves onto the train back to Nice and then shuttled off to the airport.

Because she can’t get enough of being on an airplane.

Away from the sun and back to the rain of Basel. Until next time, Côte d’Azur!