Part 1 covered G’s participation in a children’s parade with her preschool. Part 2 is going to be about Birsfelden’s very own Fasnacht.

Last year we were new and also lived right in Basel’s city center. We didn’t have to go far to look for Fasnacht activities and, to be quite honest, doing anything more than the three days we did probably would have been overwhelming.

This year, though, we were in our new city. A city with its own, admittedly smaller, Fasnacht parade. Birsfelden holds its parade the Saturday before Basel’s Fasnacht begins. It’s like a warm-up, an appetizer. We figured it would be a small event, which it is for the most part. After G’s Saturday morning ballet class and a failed nap time, we headed to the main drag to get our parade on.

One thing we weren’t prepared for is that Birsfelden has its own Plakette! We had already picked up our Basel Plaketten and figured we would be fine, but Andy found out the hard way.

In theory, wearing your Plakette is supposed to protect you from confetti attacks, but that hasn’t actually been my experience. Maybe it’s worse when you don’t have any Plakette at all? I do know for sure, though, that when you have the more expensive Plakette, you’re more likely to get alcohol from the people throwing out fruit and flowers during the parade.

Anyway, Andy was wearing his Plakette prominently on his raincoat, but it didn’t matter.

He still ended up with several handfuls of confetti shoved down the back of his coat.

It was raining on and off, so G spent a lot of the parade with her hood up. 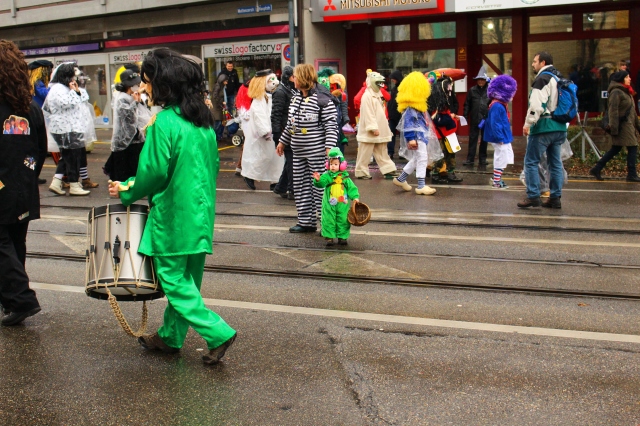 Cutest parade watcher. I kind of wished that I had ear protection like that for G and for me by the end of Fasnacht. 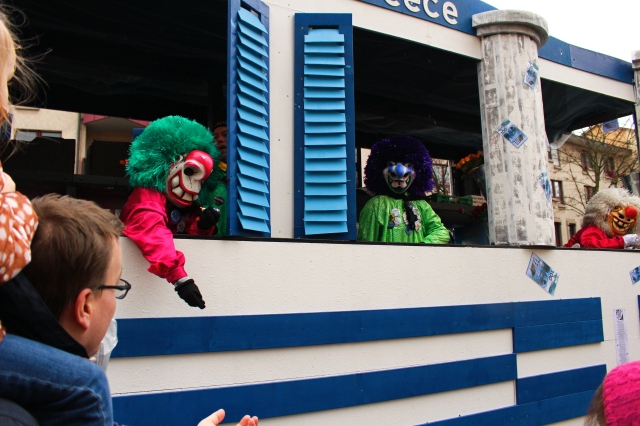 Commentary on the Greek debt crisis.

Creepiest masks of the Birsfelden parade.

Aside from the floats that gave her candy, this one was G’s favorite. 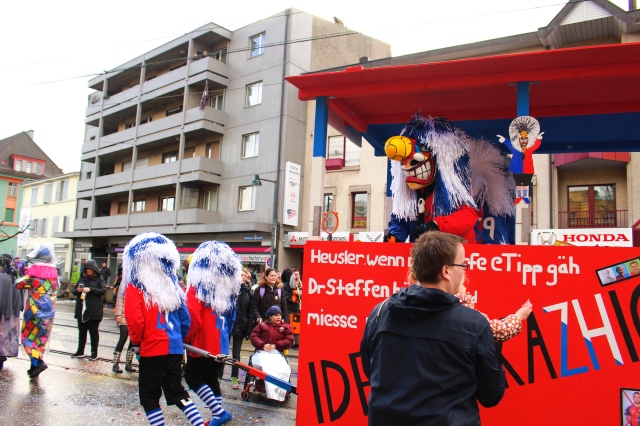 The Birsfelden parade route is very short, especially when compared to the route in Basel. We watched the same groups circle around twice and then packed it in for home.

The ol' sock bun was looking a little worse for the wear post-ballet, post-wardrobe change, post-nap, and post-wearing her hood due to the rain. The confetti makes it festive, though. #lavieve #latergram #birsfelden #switzerland #baselland #fasnacht #confetti #messyhairdontcare

When your hair looks like this, it’s definitely time to head home.

Here’s the Birsfelden Fasnacht Snapchat so you can hear some of the music we were treated to.

Next up: Morgenstreich and three days of Fasnacht!