Alright, today we’re hopping back into the time machine to talk about Herbstmesse, which is Basel’s Autumn Fair. It’s a two-week-long fair that takes place in several of the Plätze around Basel. It’s particularly exciting for several reasons, among them are the fact that it is open on Sundays and is open fairly late (10 or 11 PM at most of the locations).

It has crafts for sale, food, and the big draw of any fair: rides. I’m not much for rides in general, and especially not ones that can be taken apart and moved from place to place. I’m too much of a worrywart for that kind of silliness! I try to set it aside for G’s sake, though, and luckily she’s not big enough for the scarier rides yet anyway.

Since the fair is two weeks long, we went several times and I have pictures from various visits.

Riding the tram on the way to Petersplatz; she just looks too cool in this picture. Side note: When we moved here, G had four pairs of sunglasses. Last year she left one on a bus and another on a tram. Then in March 2016 she lost a pair at the German train station. The pair she’s wearing in this picture are the only ones she has left.

I know that dream catchers are fairly ubiquitous, but between these and some of the imagery we’ve seen at Fasnacht, it seems that the Swiss have a fairly pronounced interest in Native American culture. I won’t lie, it strikes me as a bit odd. 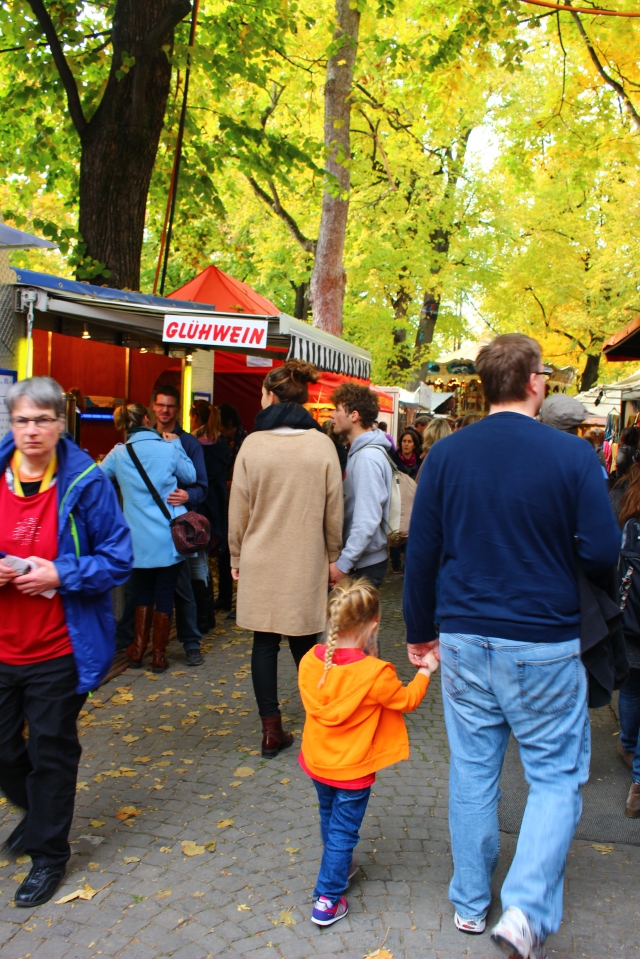 First chance of the year for Gluehwein!

G is absolutely all about the rides. She loves them. And to Andy’s delight, she let him go on the carousel with her!

In the middle of Petersplatz they had a fenced-in kids’ area with small rides, dress-up clothes, and some crafts. There was a small admission fee, but G was super excited about it and we thought the price was worth it.

In her words, she was a princess dragon wearing a party hat. 👸🐲 #lavieve #latergram #herbstmesse2015 #basel #switzerland #welcometobasel #canonrebelsl1

Demonstrating one of the many ways she is indeed my child, G was horrible at tetherball.

Harry Potter reference for the win!

One evening, we met Andy at SBB after work and headed to Herbstmesse for dinner and rides. Fair food is somehow more charming when you eat it on the stairs of Barfüsserplatz surrounded by centuries-old buildings and modern fair rides.

Genevieve was certain that she wanted to ride The Enterprise, which is a Ferris wheel that takes you upside down. Andy and I were certain that she would hate it and also that neither of us wanted to take her. (I also think she was too small for it anyway.) This was her face as she realized we were right. She decided she did not want to go uppie-down. #lavieve #latergram #basel #welcometobasel #herbstmesse2015 #canonrebelsl1 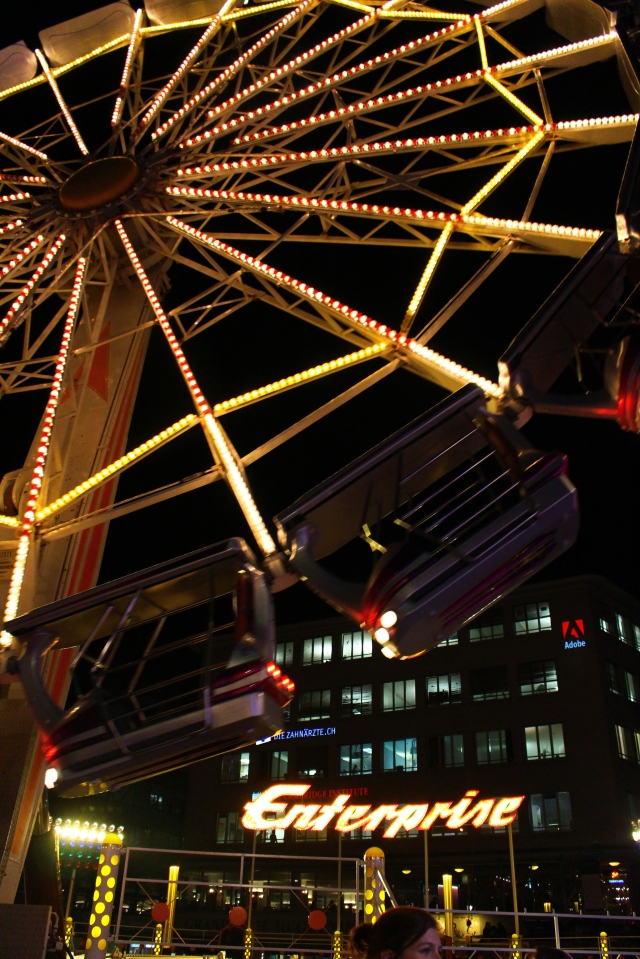 Never would I ever.

After riding the carousel a few times, we headed to Münsterplatz to see what rides were there.

We were greeted by this beast. I am normally all about the swings at fairs, but this was on a whole other level. I’ve been up that high, but I don’t need to do it on a fair ride. (I’m seriously such a wet blanket and G is going to hate going to fairs and amusement parks with me in a year or two.)

Andy and G getting ready to ride the bumper cars. G loved it!

It was no London Eye, but this was still an impressive Ferris wheel. 🎡 #latergram #basel #welcometobasel #herbstmesse2015 #canonrebelsl1

G and I rode the Ferris wheel; Andy opted to stay on the ground.

The view of the swings and the Münster from the top of the Ferris wheel. 🎡 #latergram #basel #welcometobasel #herbstmesse2015 #canonrebelsl1

Instead of paper tickets, the fairs here in Basel use plastic tickets or tokens. You get one for a set price and then get a discount as you buy more, as per usual. However, rather ingeniously, each of the different Plätze sell different tickets; sometimes even the different rides within the Platz have different tickets. So you can’t truly buy in bulk and carry the tickets around with you. We definitely spent a lot on rides and if I’m not mistaken, I still have at least one ticket from Herbstmesse or the Christmas Market at home. There’s always next time, I guess.

One of our friends from back home was in Germany for work for several weeks, so he came to Basel the last weekend of Herbstmesse to visit us. Andy took him around town on Saturday afternoon while G “napped.” (I’m reasonably certain she skipped her nap that day because she always does when we plan to be out late and she really needs one.) Then we headed to Herbstmesse that evening. We managed to find G’s favorite part of the whole event:

I’m guessing you can translate this one for yourself!

My proud little cowgirl! G's first pony ride without Andy or me next to her; she's getting so big! 🏇 #lavieve #latergram #basel #welcometobasel #herbstmesse2015 #canonrebelsl1 Her pony was officially named Mali, but G renamed her "Spotty."

The next morning we had brunch at Union Diner and then headed to the Rhein for a ferry ride, which is a necessary stop for any Basel tourist. We also got our last look at the 2015 Herbstmesse.

A view of the Münster and the Ferris wheel from the Kleinbasel side of the Rhein. #latergram #waylatergram #basel #welcometobasel #herbstmesse2015 #switzerland #canonrebelsl1

We’re all, but especially G, looking forward to Herbstmesse 2016!