(In my continuing quest to get caught up on blog content, I bring you our trip to Amsterdam… which happened over Halloween weekend. Oy!)

Back in July I got a message from one of my cousins that he (who I hadn’t seen in over 10 years) and his wife (who I had never met) were going to be in Amsterdam at the end of October and Paris in early November. Andy and I started looking at travel costs for me to go see them versus all of us going. We settled on Amsterdam over Halloween weekend and decided that the whole family would go.

(Halloween isn’t much of a thing in Basel at all, but it’s a little bit of a thing in Amsterdam. G was already excited and talking about what she wanted to be for Halloween and I didn’t want to miss her dressing up, even if that was pretty much the extent of the celebration.)

We woke up dark and early on October 30th and headed to the airport. When we arrived in Amsterdam, G had only one thing on her mind:

As we got off the plane at Schiphol, G said (in her new British lilt), "Can we go to the airport @starbucks?" One kid's hot chocolate and slice of banana cake later, we had a very happy camper. #lavieve #latergram #amsterdam

3 days of free public transport, one free canal cruise, free admission to museums, and discounts around the city. Not bad for €69! Let's do this. #amsterdam #iamsterdam

City passes in hand, we grabbed a bus into the city and headed for our hotel. We were there too early to check in, but they did have a place to store our luggage. I texted my cousin to let him know we were in town and then headed out to see what we could find.

There were a few museums within walking distance and there was a big green space as well, so G enjoyed running around for a bit:

I don't know what this pose is, but I love the sassiness. 👋 #lavieve #latergram #amsterdam #canonrebelsl1

Andy and G are standing in front of the Rijksmuseum (the Museum of the Netherlands).

We tried getting a picture of G up on the "m," but she said it was too high and the attempt just resulted in hilarious facial expressions on Andy's part. I amsterdam. #lavieve #latergram #dedakitty #amsterdam #canonrebelsl1

I got a text from my cousin that we could meet him at Vondelpark, so we headed that way. (We had purposefully booked a hotel not too far from the AirBnB where my cousin was staying, but it’s hard navigating a strange city with no GPS! This was one of many times that I bemoaned that my US cell phone covered such a huge area while my Swiss phone covers such a tiny country and is only helpful in a very expensive way anywhere else. We walked around holding maps up and looking like major tourists.) 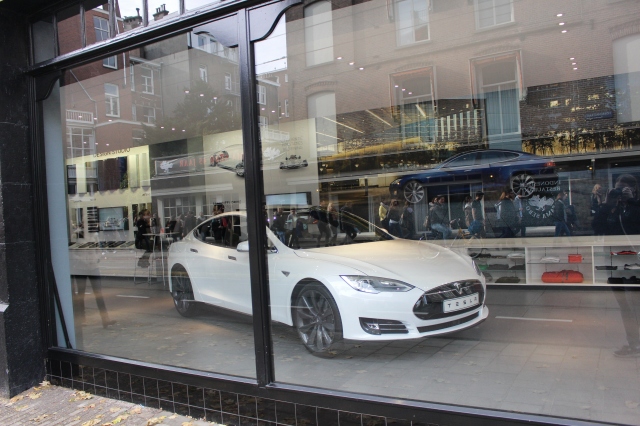 Did some window shopping on the way to the park.

Success! (I was almost hit by several bikes trying to get this picture.)

Climbing trees and pretending to be No Noggin. (We had just watched Curious George: A Halloween Boo Fest.)

We finally managed to find my cousin and headed to his AirBnB to catch up. He very gamely gave G a piggyback ride (which I was shocked she accepted) for part of the way. We hung out for a while, trading stories and entertaining G. We made plans to try to get together for dinner and then Andy and I took G back to the hotel to check in and take a nap. 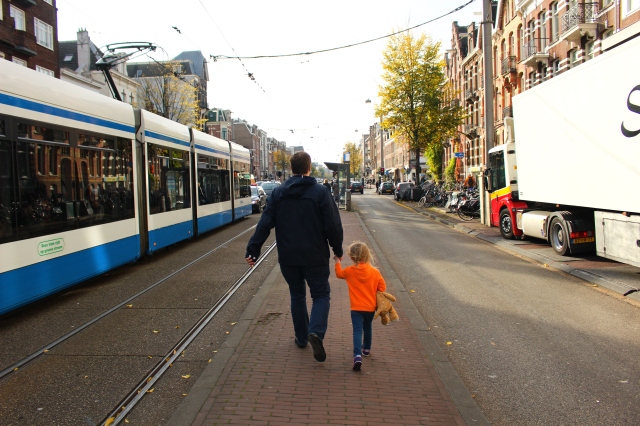 Heading to the tram stop.

We walked way more than we really should have, considering we had paid for tram and bus passes. The public transport in Amsterdam is good, but the public transport in Basel is way better. We have more convenient routes (although that’s probably a biased opinion) and better adherence  to the schedule here in Basel. There were a couple other major differences. Here in Basel you have to tell the bus (via button) when you want to stop at a stop, but the trams stop at all the stops. In Amsterdam, you have to tell the trams to stop, too, and then push a different button to get the door to open when you finally get to that stop. You also have to scan your pass as you get on and off the bus or tram (and could cause issues for yourself the next time you try to get on if you forget to scan your pass as you get off). In Basel you only have to show your ticket or pass when the random inspectors come on. 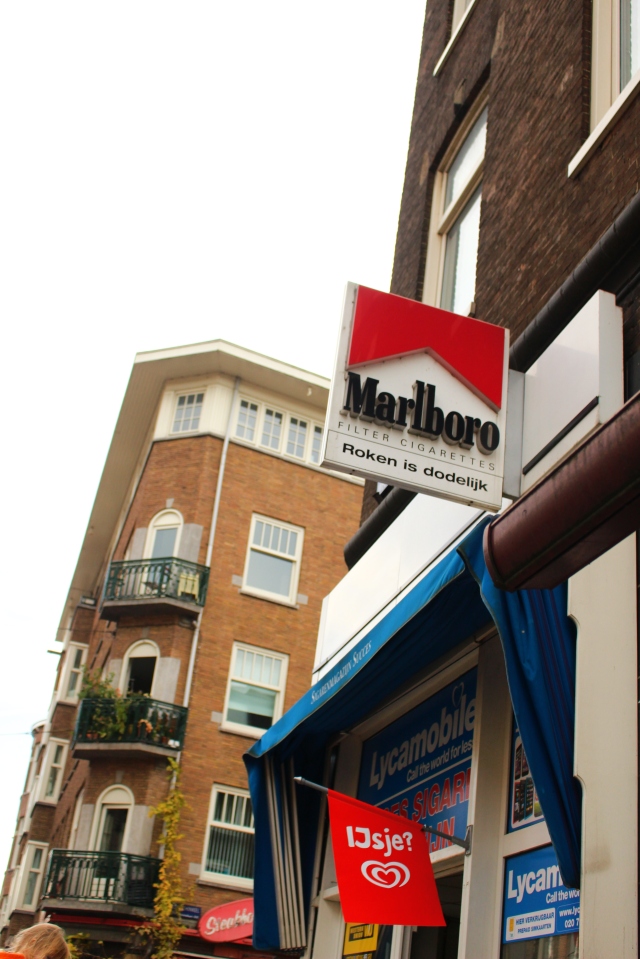 What this actually says: “Smoking is deadly.” What my mind thinks it says: “Rockin’ like Dokken.”

We went to an Italian restaurant in the same neighborhood as our hotel for dinner. The streets were all decorated for something (or maybe they’re just always like that). 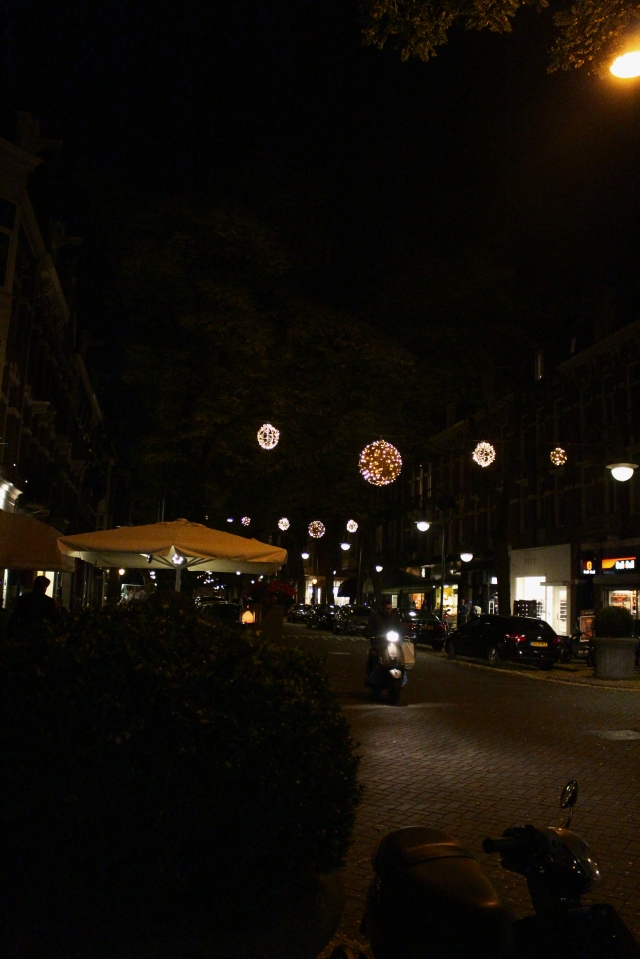 Andy and G had an outdoor dance party while we were waiting for our table.

Dinner was great! We had a lot of fun meeting my cousin’s wife and just talking about life. We were eventually gently kicked out of our table because they needed it for people who had a reservation (fair enough). We said we’d get together again the next day for dinner and then headed back to our hotel.

On Halloween morning, G said she wanted pancakes so we headed to The Happy Pig. This place was awesome. 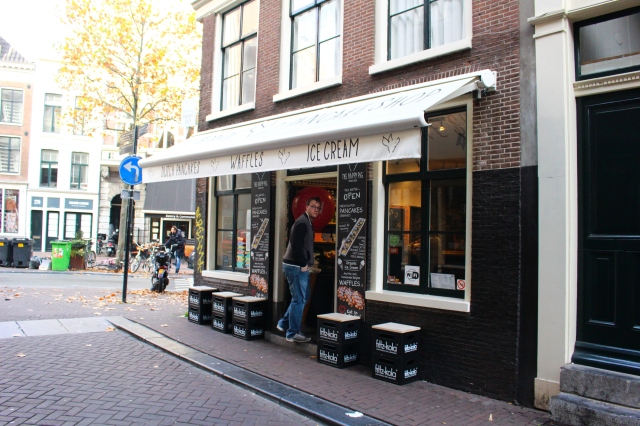 Andy heading in for a delicious breakfast. 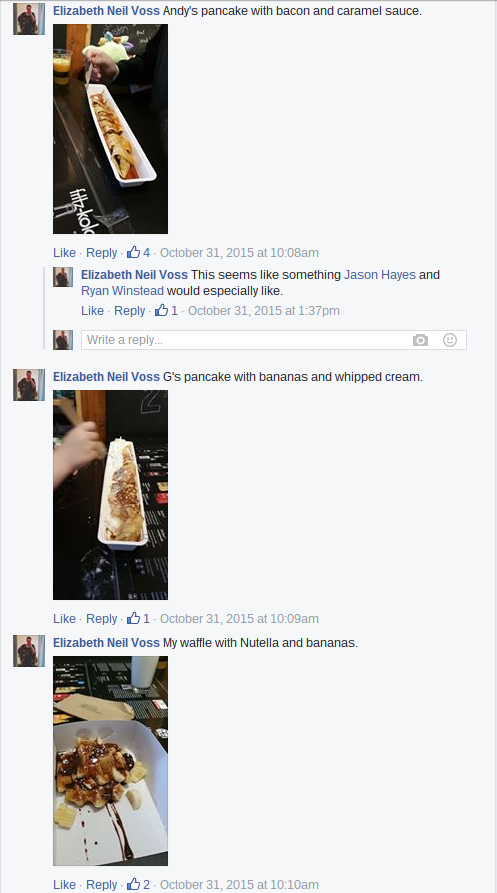 G’s pancake was so yummy that she didn’t want to stop eating, even when she was full. “My tummy hurts,” she said as she shoved another bite in.

After breakfast, G needed to go to the bathroom. The restaurant didn’t have a toilet and normally she sends customers to the nearest coffee shop, but didn’t want to do that for a 3-year-old. She gave us directions to a toilet store, but we totally failed at following them. We ended up at a mall, though, that did have pay toilets available.

This was that mall. Just like in the States, right?

After that, we wandered the city some more and then decided to take our free canal cruise. 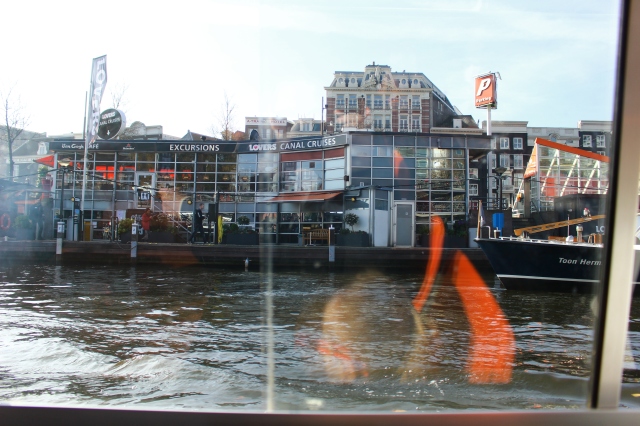 Our captain was great. He gave us a lot of information (very little of which I can remember now) and made a lot of toilet jokes.

Seriously, I amsterdam everything.

This is the city’s largest floating Chinese restaurant, although I seriously wonder how much competition it has?

This building is apparently Amsterdam’s Leaning Tower of Pisa.

This boat has problems. 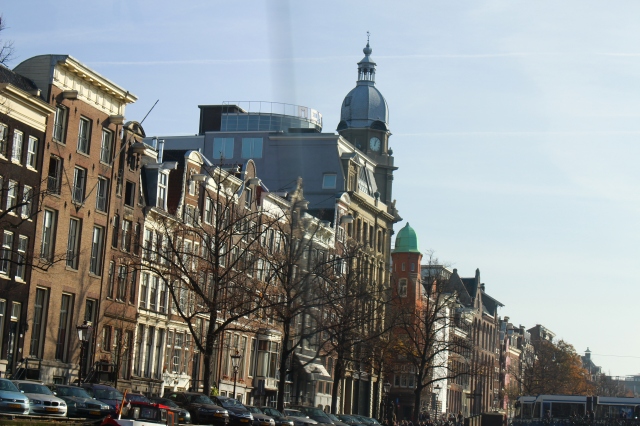 After the cruise, we went back to the hotel for G’s nap. Then we got G dressed in her Halloween costume:

Then we headed for the Van Gogh Museum (with free admission thanks to our city pass).

Waiting to get in.

The museum doesn’t allow any photography, so I only have one picture from the visit.

Van Gogh and Munch painted at the same time, in a lot of the same cities, and had very similar themes running through their work, but they didn’t actually know each other. The museum had a really cool exhibition where Van Gogh’s and Munch’s works with the same themes (loneliness, anxiety, love, etc.) were displayed together so you could compare and contrast their styles.

We also learned that Munch made four versions of The Scream. The one on display at the Van Gogh Museum was crayon on cardboard.

After the museum, we headed to The Golden Temple to meet my cousin for dinner. They were having a Halloween celebration that was a little unusual, including giving us charcoal to put on our faces and an apple to leave on our table to feed the spirits. OK.

But the food was great, from the nachos we had as an appetizer to G’s small cheese pizza. I had an excellent chai tea there, too.

We were beat after dinner, so we caught a cab back to the hotel. (Damn that inconvenient public transportation!)

Halloween dinner was the last time we ended up seeing my cousin and his wife. We were leaving the next afternoon and she would still be in her workshop. We tried to get together with my cousin before we left, but weren’t successful. Regardless, it was so great to spend some time with them! And crazy that we were able to fly to Amsterdam and stay in a hotel for the weekend for less than it would have been for us to visit them in the US (Peoria to Arizona). Oh, Europe.

On November 1st, we woke up, packed up, and had breakfast at a café near our hotel. After that we headed for the Amsterdam Zoo. Andy and I had free admission with our city passes, but even though G was young enough not to need a city pass, she was old enough to have to pay admission to the zoo (lame).

On the surface, this seemed like a nice zoo. It had a lot of cool components, including a planetarium and an aquarium. However, it had the most depressingly small lion enclosure I’ve ever seen (worse than the original lion enclosure at the Peoria Zoo). I couldn’t even bring myself to take any pictures of the lions because they were so visibly upset. It’s the first time that I’ve been that upset about a zoo and really understood how some people can be completely anti-zoo. Peoria’s upgrades and the great zoos in Basel and Zurich had kind of skewed my perception.

We tried to make the best of it, though! 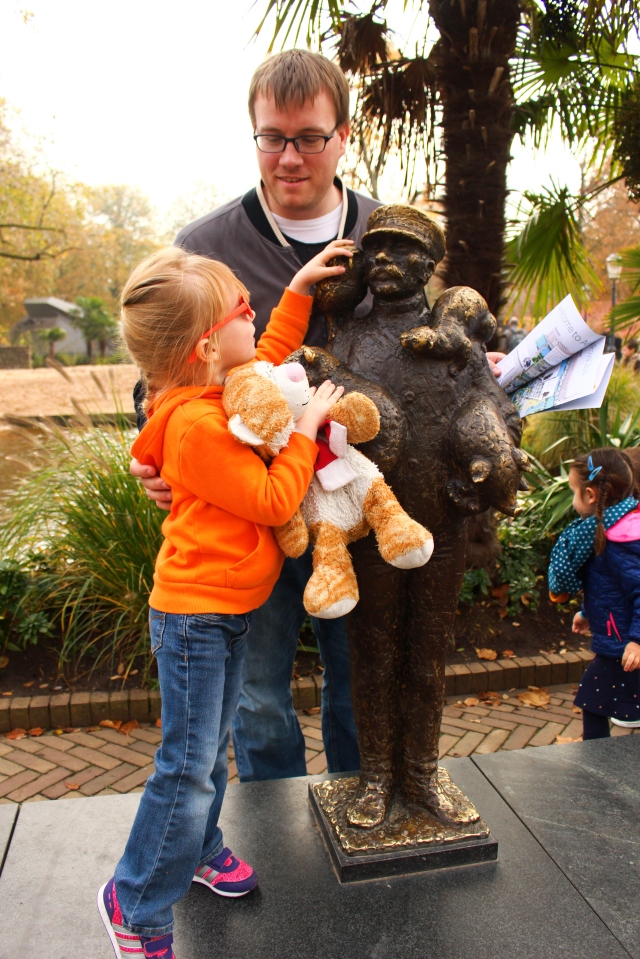 G loved that this statue was her size. 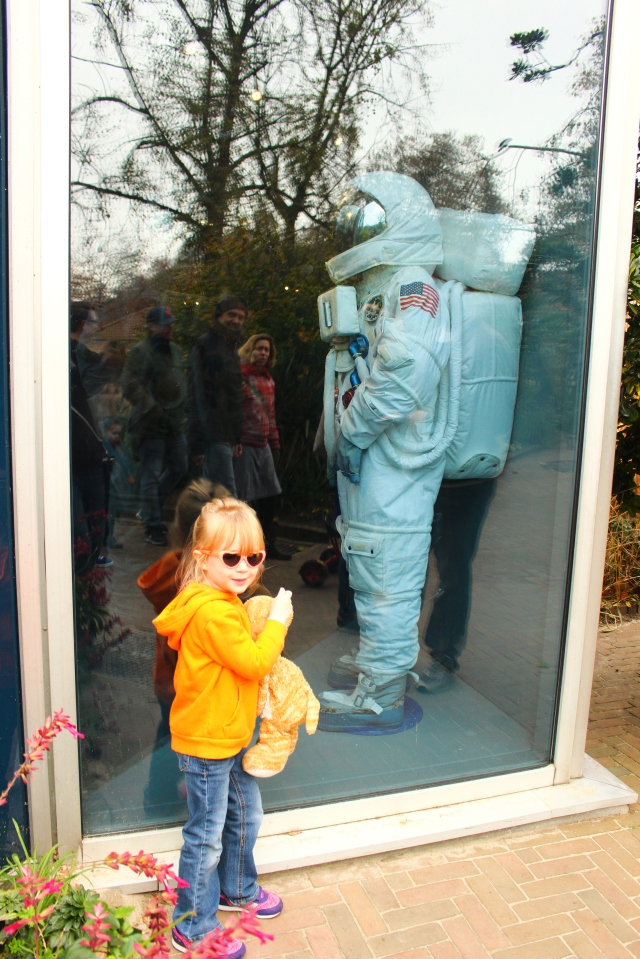 A REAL ASTRONAUT SUIT! G was so psyched! 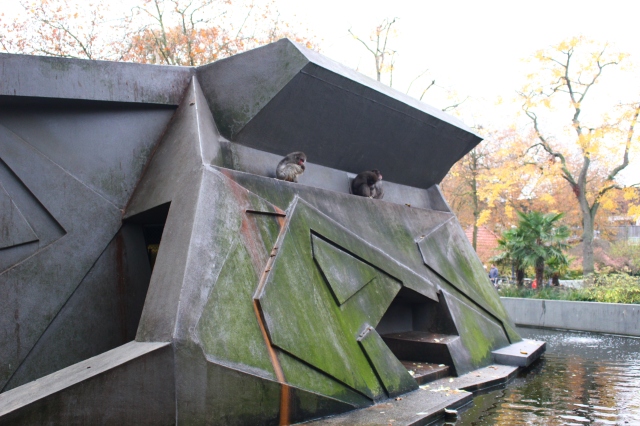 This primate habitat was so weird.

So tiny and disapproving! 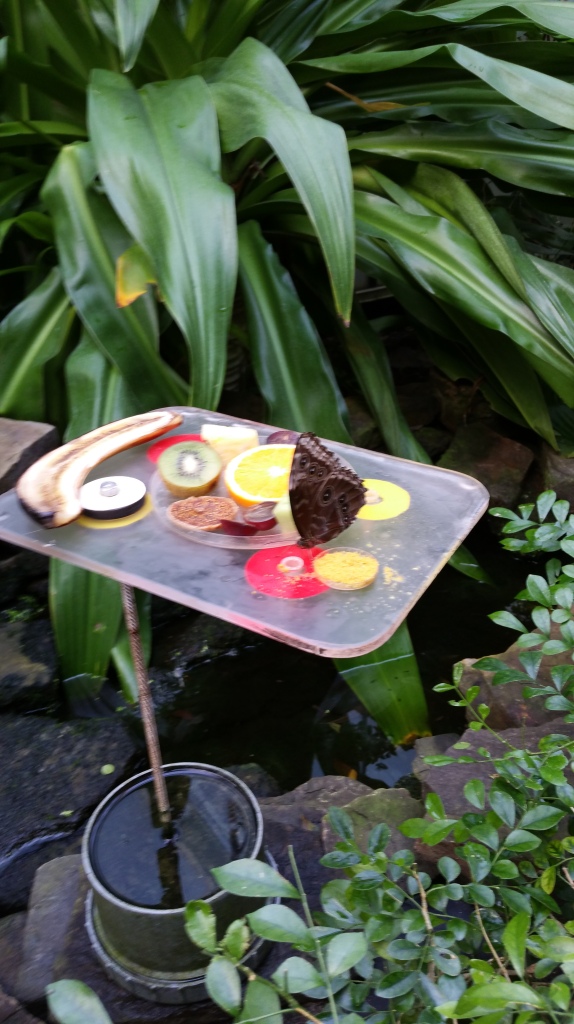 This was the only picture I got in the butterfly garden because my camera and phone camera fogged up and couldn’t acclimate to the temperature and humidity. 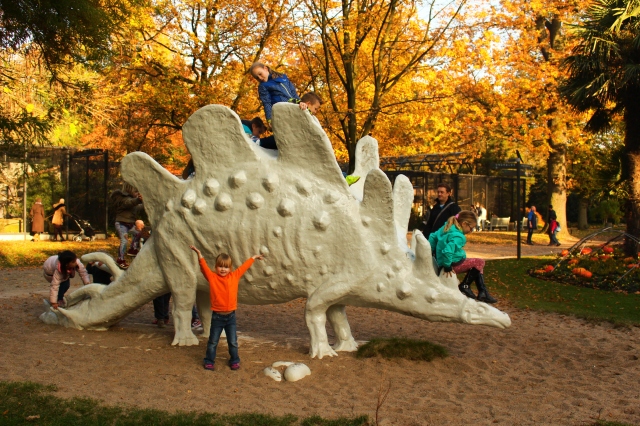 G was pretty excited about finding a dinosaur and its eggs.

It was a looooong day at the zoo. I present to you Exhibit A:

We went back to the hotel, grabbed our bags, and headed to the airport.

G got to be a pilot and I broke the no photography rule. (Oops!)

We changed G into PJs and got ready to board the plane. It was a long and jam-packed weekend that we all loved and were ready to be done with. The life of a jetsetting expat is full of paradoxes like that.

Until next time, Amsterdam!

One thought on “Americans in Amsterdam”