[Final installment of the Paris trip!]

Saturday morning, we woke up, had our breakfast, and caught the shuttle bus again. This time, instead of heading into Disney Village, we went into the train station. G and I entertained ourselves in the gift shop while Andy waited in line to buy our tickets.

After a short train ride (45 minutes or so), we found our way up out of the Paris Metro and were greeted by this.

Arc de Triomphe. Way bigger and more impressive in person than I ever thought it would be. #latergram #waylatergram #paris #arcdetriomphe #playingtourist #tourist #europe #france #canonrebelsl1

In pictures, the Arc de Triomphe looks big.  In person it is just huge.  I was very surprised by its size.

We wanted to go look at the Arc from close up and there were two ways to get there: Run across that busy street (no thank you and also not a good lesson to teach G, haha) or go under the street and wait in line to get in.

That’s what we thought, anyway. It turns out there was a third way: Go under the street and skip the line completely.  You actually only needed to stand in line and buy tickets if you wanted to go up to the top of the Arc, which G and I did do.  Andy had no interest in it, so in essence, his ticket was wasted, but that’s no real biggie. 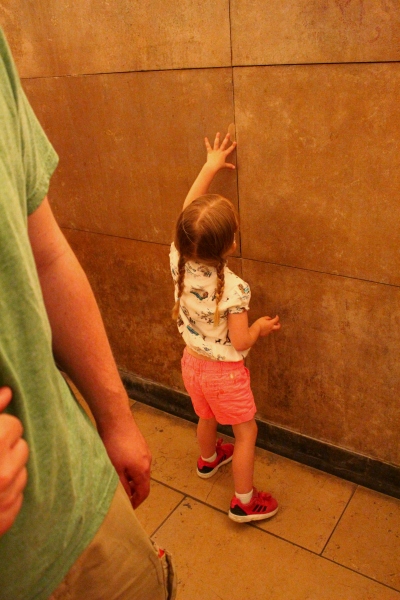 Waiting in line to buy tickets for the Arc. Note her two braids. As soon as we got up the stairs at the base of the Arc, G said, “Oh, no! My pigtail!” We looked at her and one of the ponytail holders had snapped, leaving her with one braid and half of her hair down. I have no idea what happened.  So I took out the other braid and carefully put her hair up into one ponytail (I was so scared that one would break, too). 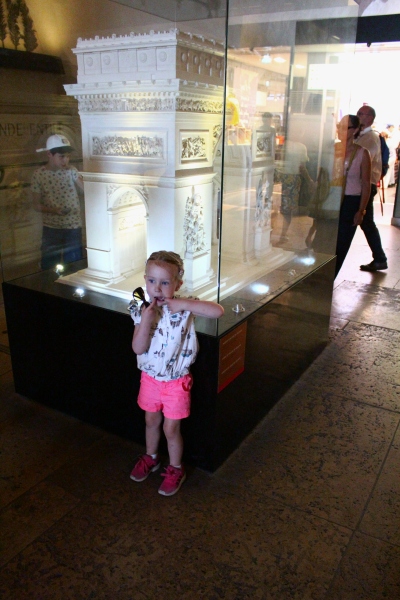 Making her favorite face of the trip at the top of the Arc. This is inside, obviously.

There were wide viewing platforms all the way around the top of the Arc with sturdy railings.  They also had a couple of panorama platforms that named all the buildings and monuments you could see, but people were just using them for selfies and I didn’t have time to wait around, since I was herding G up there.

Anyway.  The view was pretty nice. 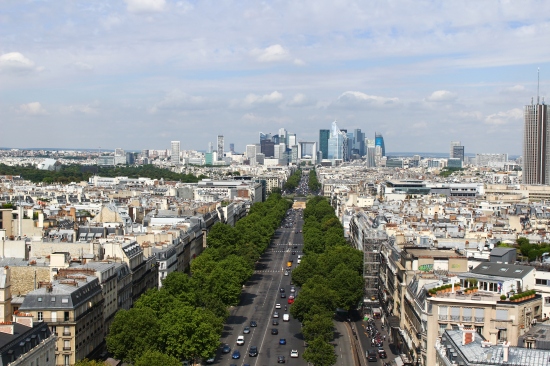 I assume that’s downtown Paris. I love seeing all the trees along the road. Every main road was like that: a double row of trees going off into the distance. 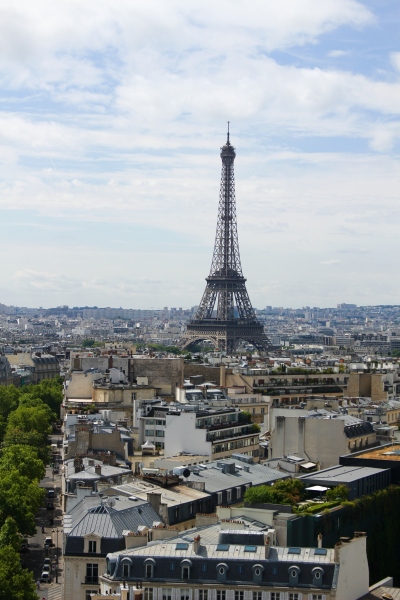 “Is that the Eiffel Tower? I want to go see it!”

After taking in all the views, G and I took the elevator back down and found Andy. I snapped a few more pictures. 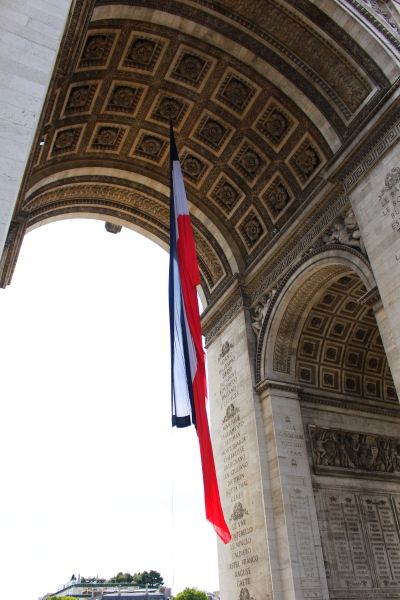 Far and away one of the largest flags I’ve ever seen in my life. Also, the intricate decoration and writing all over the Arc are a little overwhelming.

The Tomb of the Unknown Soldier.

G was getting restless and we were all getting hungry, so we left the Arc in search of food.  As we were walking along Champs Elysées, we passed some pretty impressive stores.  G fell in love with a necklace at Cartier and also this staircase at Swarovski.

Many moons ago, I got told that I was not allowed to take pictures of a window display at the Swarovski store at Woodfield Mall. I was a little nervous taking this picture for that reason. But I needed to document those sparkly stairs.

Right next door we found Pizza Vesuvio, which had immediate seating outdoors and a kids’ menu. We were sold.

Hands down the most ice I've received in a glass since moving to Europe. #latergram #waylatergram #paris #pizzavesuvio #europe #france #canonrebelsl1 #expatlife

In addition to all that ice, they gave us free bread and free water! You don’t get that here in Switzerland! We were practically giddy!

G was a fan of the pasta.

Andy and I got a delicious pizza to split. G’s meal came with dessert that we all shared. The whole thing was great except for two parts:
1) When G was messing around and knocked her water glass off the table and it broke. Oops!
2) When the table next to us ordered salmon pizza and the smell nearly did me in.

After lunch we started our walk to see the Eiffel Tower. [Note: I don’t know why, but I can’t bring myself to call it Tour Eiffel. I guess just habit? Who knows?]

As always, G’s love of buskers continues to be one of my favorite things.

We passed some pretty swanky stores. 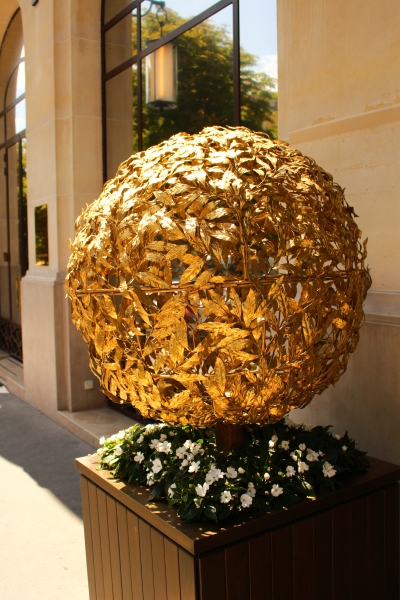 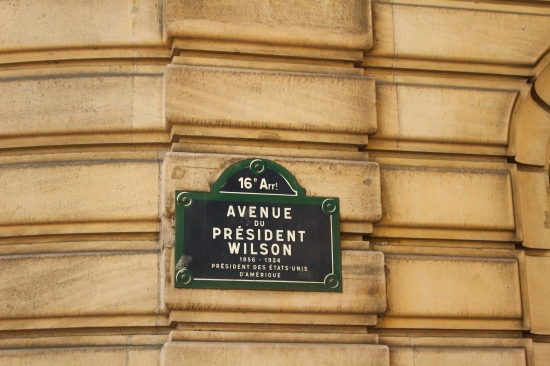 Just as I was pulling these pictures together, I realized what the “16th Arr.” at the top of this sign meant. Go me.

This picture has become my most-liked Facebook profile picture ever, so thanks, Andy 🙂 G claimed that the Flamme de la Liberté had burned her fingers, so I was giving them a kiss for her. 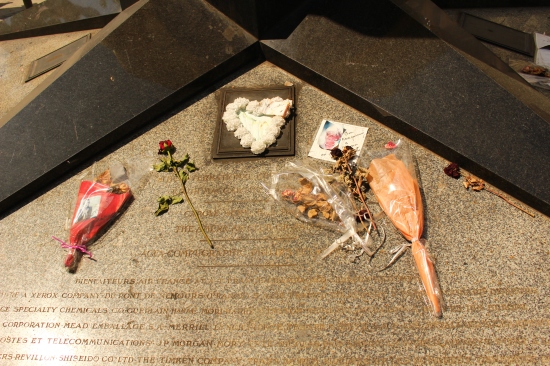 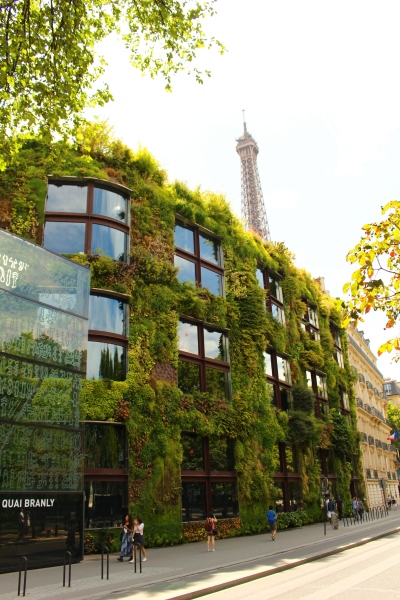 I have no idea what this building is, but I love it.

That pose. That smirk. The fact that she had to stand RIGHT THERE on that grate instead of someplace that I could get the Eiffel Tower in the background. #lavieve #latergram #waylatergram #paris #playingtourist #tourist #europe #france #canonrebelsl1 #sunnies #littleandbrave 💅👓

G and I wanted to go up the Eiffel Tower (Andy again planned to stay on the ground), but the lines were ridiculous.  After two days at Disney, I was over lines, but also spoiled by lines that told me how long I was going to have to wait. There was no way I was getting in a line of indeterminate length and waiting with G. The line to walk up the stairs wasn’t bad, but again, not happening with G. So I snapped some pictures and then we hit the gift shop. (We are horribly clichéd tourists.)

Then we went to find Le Carrousel de la Tour Eiffel. I had spotted it on our walk and pointed it out to Andy, but didn’t tell G what was up until she could see it for herself. 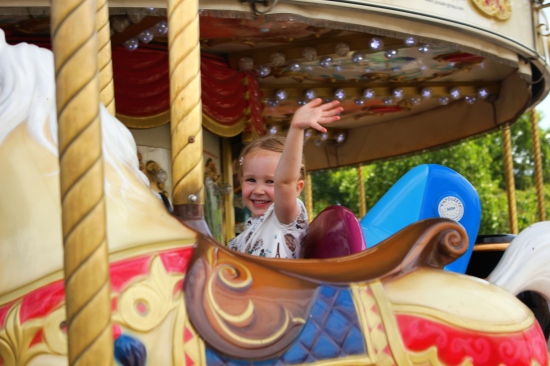 She was a fan.

After the carousel, we hopped in a bike taxi to go to the Louvre.

This was a very cool way to see the city.

Geez, G. Relax for once in your life.

In retrospect, I understand why the pricing is done this way. But I don’t feel that a 3-year-old should pay full fare and I also think you shouldn’t hide the “Price per Person” part of your sign until you’re charging the fare at the destination. But anyway.

The Louvre is one of the biggest buildings I have ever seen in my life. Scratch that, because it’s not just one building. It’s a ton of buildings and they’re all big. We knew with G in tow there was no way we were going to make it through even a tiny fraction of the galleries, and certainly not without a fit. So we hung out in the gardens outside.

The main part of the museum and the iconic pyramid.

I was kind of surprised to see another arc outside the Louvre. This is the Arc de Triomphe du Carrousel and was built to celebrate Napoleon.

G announced that she needed to use the bathroom, so we headed down into Le Carrousel du Louvre and found the PointWC. I would gladly pay €1.50 to use a public bathroom every time if they were all that clean. And as a bonus, each stall has its own theme! I didn’t get to experience that too much, though, as I was in the family stall with G. She was pretty happy about the tiny armchair she got to sit in, though, so that’s cool.

We made our way back up above ground and set off to find Cathédrale Notre Dame de Paris.  Not being Catholic and never even having seen the Disney movie about the famous hunchback, I was only marginally interested, but Andy was excited to see it and he put up with all of my sightseeing requests, so I was happy to walk along the (stinky) river and take in the sights.

This is one of the outside walls of the Louvre. So many textures in just that one corner! 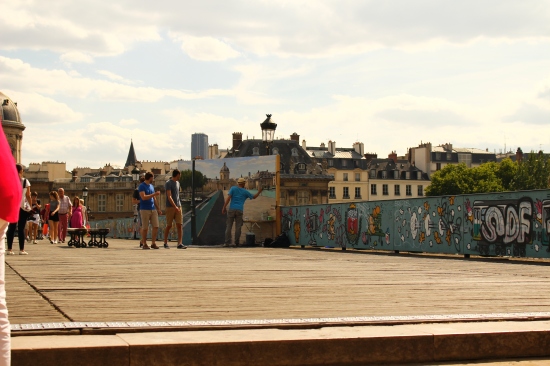 People will not be deterred from hanging their lock along the Seine, even if it’s not OVER the Seine.

This is something I would like to go back to see. 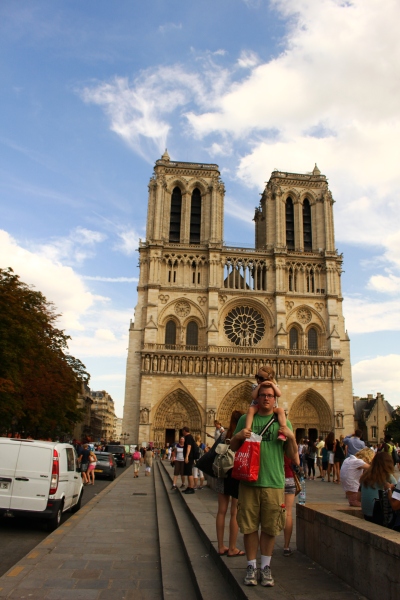 G was just over everything at this point.

“That statue is creepy. He looks like…” “Cthulhu?” “No, that octopus pirate from Pirates of the Caribbean.” “Oh, Davy Jones? Yeah, I can see that.”

You couldn’t pay me to have that many pigeons on/around me. We had to tell G she was not allowed to chase them, though. 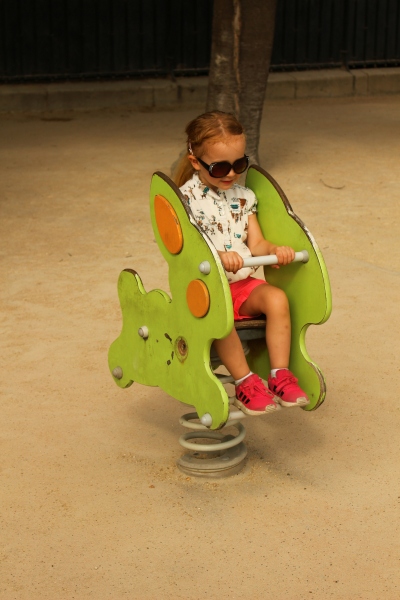 I could have spent the rest of the evening taking pictures of the gargoyles. I’m really glad we went to Notre Dame and I would like to go back and actually make it inside sometime.

We hopped a cab and headed back towards Pizza Vesuvio. There was a movie theater near there that had evening showings of Inside Out (aka Vice Versa in France) in English and we thought that’d be a nice way to end the day. (Inside Out isn’t coming to Switzerland until October and we have no way to know if there will be English prints or not.)

Then we took the train and shuttle bus back to our hotel and all crashed out.

Sunday morning we had breakfast and played in the pool before heading to the airport.

Right now, we're at an expected 65 minute delay. I'll believe it when I see it. 😒

Finally finally finally we made it home.  We didn’t end up needing our passports (since the Basel airport is actually in France, our flight was “domestic”), but it was definitely a better safe than sorry scenario.

All in all, a great, but exhausting, trip.  I can’t wait to go back, though.