There are a lot of things about moving away from home, to a foreign country, that you “know” going into it, but you don’t really know them until you experience them.

A big one for us has been the language thing here.  We knew that English wasn’t an official language, but everything we read and our experiences on our trips had made it seem like it wouldn’t be an issue.  And for the most part it isn’t.  We get along fine on a day-to-day basis, but there’s no really conversations, small talk, banter, when you don’t have a common language with the people around you.

There are tons more.  I could go on and on.  If you’ve seen me in person since the move, I probably have.

Today, though, the one I want to talk about is the heat.

It makes me feel very European to complain about the heat at 32°. Celsius, you so crazy!

It has been quite warm in Basel the past week, with highs between 30°C and 33°C.  That’s the upper 80s and low 90s for those of you reading along at home in the States.

And you know what you don’t have in Switzerland?

I “knew” this.  When we came in October, there were a few days were it was in the mid- to upper-70s and we hadn’t really packed for the weather to be that warm, so it was a bit toasty.  Especially since we were on the top floor of the hotel and there were some afternoons when G (and I) would get up from our naps and be pretty sweaty.

We’re currently keeping our shutters at least partially closed all day to keep out the sun’s direct rays, which is helping a lot, but it also makes the apartment really dark (unless you turn on the lights, but I’m trying to avoid that during the day, too).

I also have our awesome 1970s-inspired awning opened up all the way to shade the balcony and kitchen.

Our oscillating fans are running pretty much full time.  G keeps asking me if she can turn them off and I have to keep myself from snapping at her!  I know she just wants to mess with them and we do try to teach her to turn things off when they’re not in use, but you don’t have to be directly interacting with the fan for it to be helpful!

G has her own way of dealing with the heat, which is to basically ignore it completely and run and play until her hair is a sweaty mess.

I can’t be mad at that, though.

I was snapping shots while shooting the video of G, and this is my favorite still. I know she was in the middle of a twirl, but it totally looks like she’s questioning that lady’s actions. WTF, lady in blue?

I think the best way to beat the heat, though, is to head to the nearest body of water and cool off.  We’re lucky to live so close to the Birs, although I’ve heard that Basel has a lot of great pools that I look forward to checking out as well. 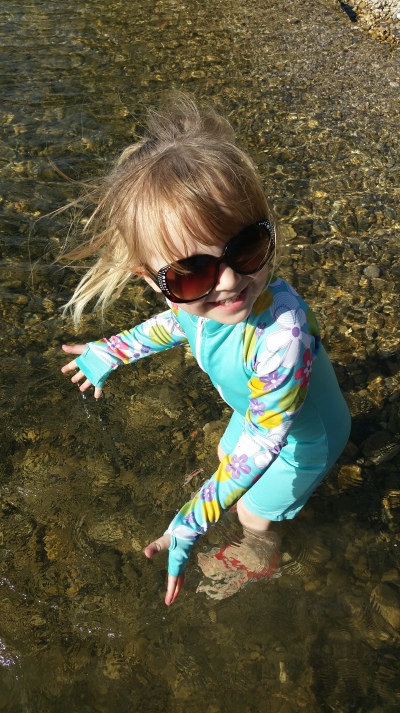 We hit the water after music class on Wednesday. G’s a fan.

Sitting on rocks in the Birs playing with my Canon. It's still another 15 minutes until sunset and just gorgeous on the water right now. #birs #birsfelden #switzerland #abeautifulmess 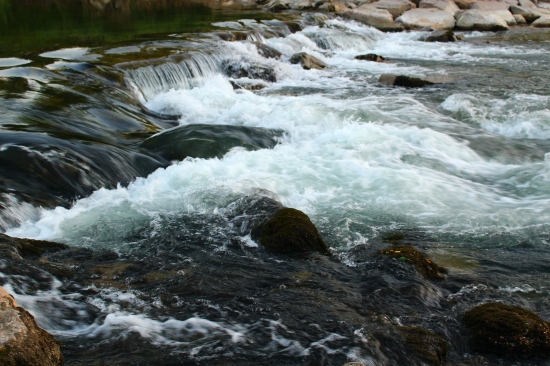 I also hung out on the river on Thursday evening past sunset (which was at 9:21 PM that night – it stays light forever here), until it got too buggy. It was starting to cool down and it was just so nice.

Back at the river yesterday! Ziggy came to swim, too, but I couldn’t get a decent picture of her.

On Thursday evening, while bringing us home from a playdate, G’s friend’s dad was telling me that people surf under the bridge near our apartment.  (He and his wife used to live on the Basel side of the Birs, so he’s familiar with the area.)  I laughed because who surfs in a river?!  He said that, no, he was serious.  And lo and behold, this is what G and I saw yesterday afternoon.

It could be worse.  I know that it doesn’t get hot enough for long enough to really justify AC here.  But it’s really hard not to miss it when the temp gets that high.

On the flip side, we’re supposed to get a thunderstorm here this evening, which is something else I’ve missed in Switzerland.  And the temps are going to be a bit cooler here this next week, so we will get a break from the heat as well.