A convenient aspect of leaving the country shortly after the holidays is that we could get together with a lot of our out-of-town friends, since they were in town to celebrate the holidays with their families.

Opportunistic revelry, does it get any better than that?

I needed to set everyone’s expectations, as I honestly thought I would spend the whole evening crying.

Our plan was to book several hotel rooms so that people could drink without having to worry about driving home, and also those of us with children could maybe put them to bed in one room and be right next door at the party (connected by baby monitor, of course).

We ended up not needing a room for the kiddos, but all of the hotel rooms got used for sleeping and one got used as party central.

My friends do a good job of setting expectations, too.

After we left G at Kathy’s house, Andy and I headed out to the hotel to get ready for everyone’s arrival.

A callback to long, long ago. It’s true, though. You don’t want to anger the vodka gods.

We had a great turnout.  Chris and Emily; Kipling, Emily, and É; Bruce; Jared; Gabe; Ryan and Erin; Don; Ray; and Quentin.

We set up a Wii for party games, although we never ended up using it.  The night ended up being full of conversation about topics old and new, Cards Against Humanity, and Werewolf.  This was our first time playing CAH in this particular group, but for a group who regularly made Apples to Apples as offensive as humanly possible, CAH was an obvious choice.  I knew that from the first time I played it.  (Shout out to DoCoTO 2013!)

We, as a group, did not disappoint.

Werewolf was brand new to us that night, but it was a lot of fun, too.  Who doesn’t love a game where you get to accuse your friends of being hairy murderers?  I don’t know what it says about our group that the werewolves vastly outperformed the villagers round after round, but I’m sure it’s nothing good.

I can’t sum up the night in words, really.  It was just about spending time with our friends before it becomes even harder to do so.

I, of course, brought my camera along, and while the hotel room lighting wasn’t ideal and I still don’t know WTF I’m doing, I liked several of the shots (mostly because of who’s in them), so here goes. 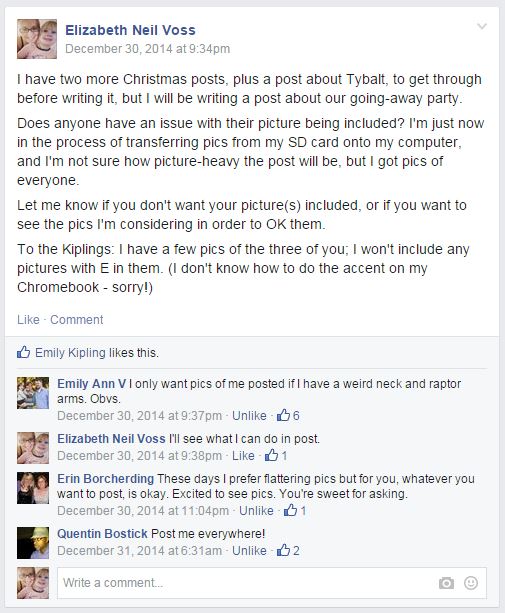 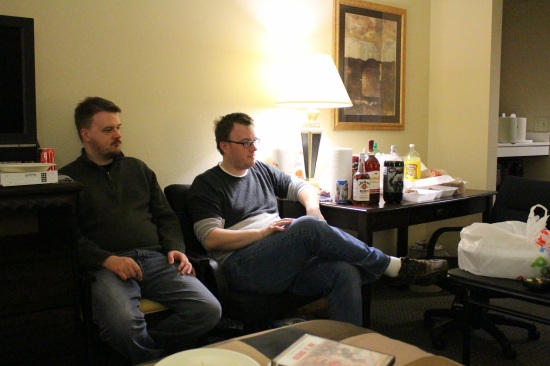 Gabe and Em. The wannabe artist in me really wanted to make this mirror picture work.  I need to improve my Photoshop skills beyond “nonexistent” in order to comply with Em’s raptor-arms request. 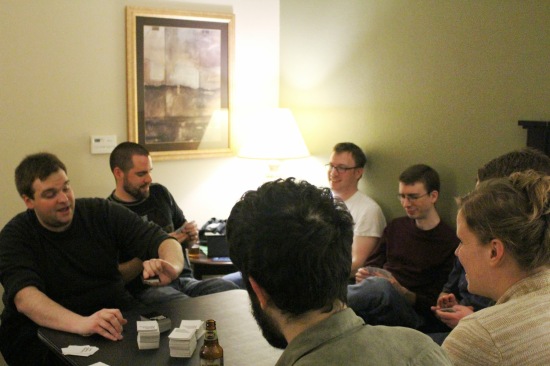 Chris had previously expressed some concern that Emily might not like this game due to its extremely offensive nature. It appears that he needn’t have worried. 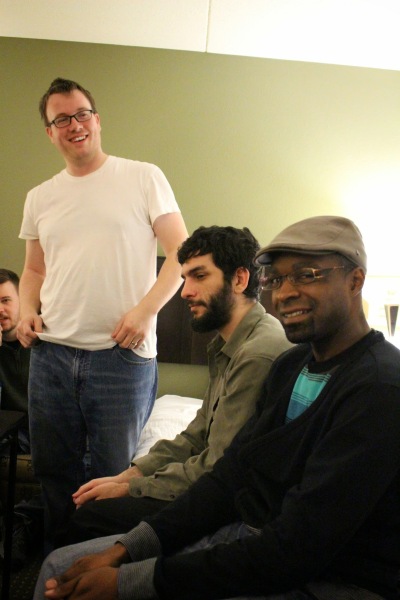 Andy attempting to explain Werewolf. Quentin had decided to make it as difficult for him to do so as possible.

Much to the delight of everyone except Andy.

Bruce is accusing someone of being a Werewolf here, but this is a pretty representative shot of how many conversations with him end up. 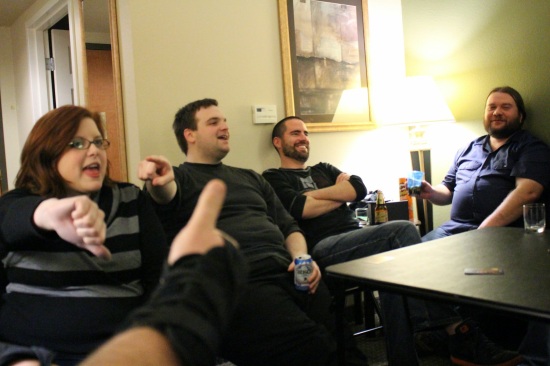 Voting time. I’m guessing Kipling is out and knows how wrong people are in their assumptions; hence his look of delight.

Was Gabe the Werewolf? Was Don? It was a pretty safe bet that it was Don. It had to be one of the people with a beard, right? 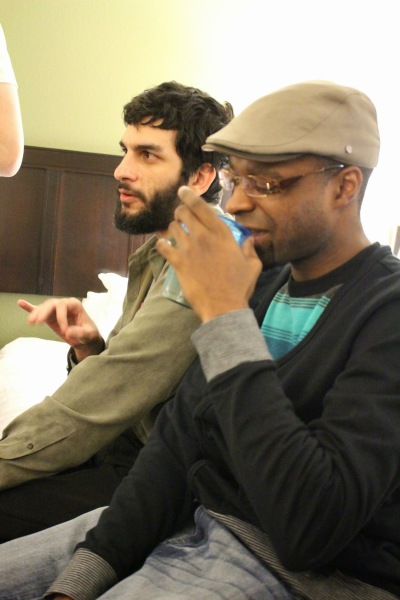 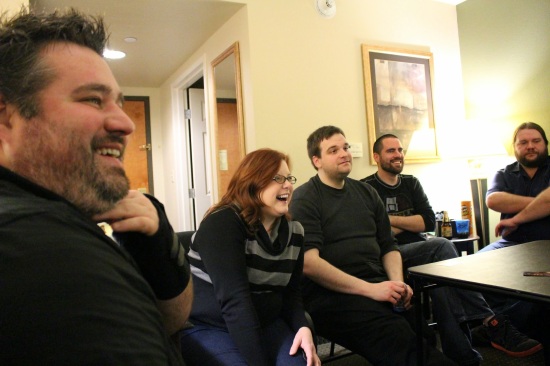 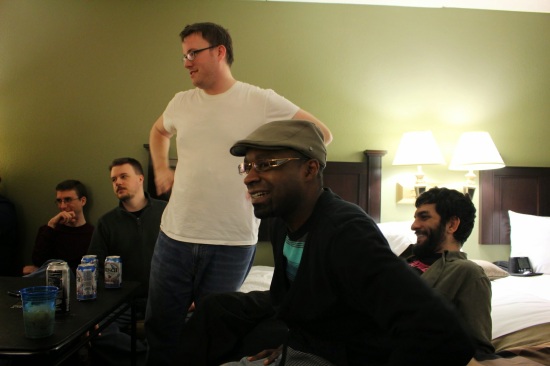 Quentin making his case (or defending himself).

Ray accusing Ryan of being the Werewolf. Again, probably a safe bet.

And also thinks either my brother or Q is the Werewolf.

I stayed up entirely too late – 3:15 AM.  Crazily, I was one of the first ones to go to bed.  Andy staggered into our room shortly after 5 AM, waking me up in the process.  Then I heard from my MIL that she would be bringing G back home by like 9 AM.  Oh, man, back to reality. 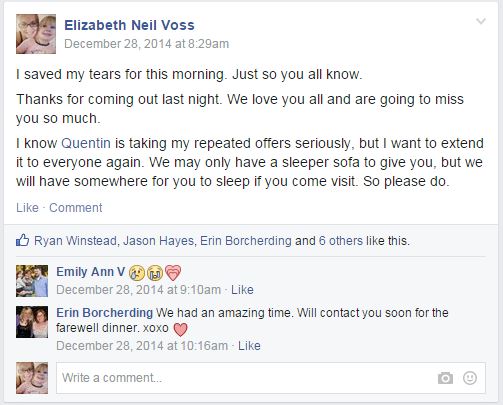 Seriously, everyone needs to come visit.

And then I thought I was done crying about this party for a while, but Bruce had to go and wreck it for me.

The jerk has a way with words.

I’m writing this post a week and a half after the fact, with a week and a half left in Peoria.  All our loose ends are getting tied up.  Final visits and get-togethers are being arranged.  Our house is slowly being transferred into boxes, and if we’re really lucky, all the walls will be repainted before we leave for the airport.

I’ve wanted to leave Peoria since I was a teenager, and I don’t see my future in this town.  But it’s still really hard to leave it behind.